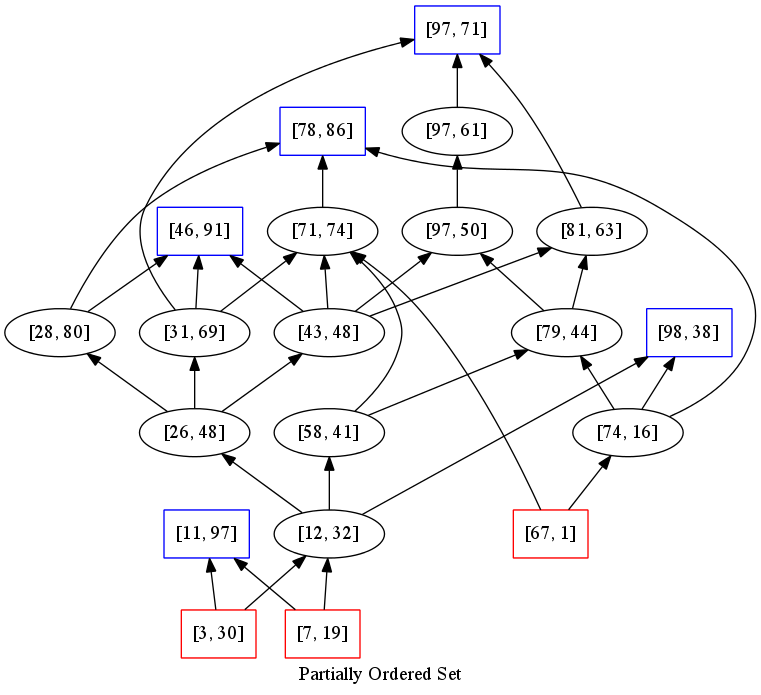 Whereas total orders allow you to say whether some element is smaller than, equal to, or greater than another one, partial orders also allow for a “don’t know”- or “undefined”-case.

Mathematically speaking, the axioms that hold for a partial order relation are the following:

Total orders, as usually used for “normal” maps that programmers are acquainted with, would additionally require the following axiom:

Whereas a total order allows you to align elements in a linear way to exhibit this order relation (e.g. [1; 3; 7; 42]), partial orders are usually represented by graphs (so-called Hasse-diagrams). Here is another example:

The elements of this example partial order structure are pairs of integers. We say that an element (a pair) is larger than another one if both of its integers are larger then the respective integers in the other pair. If both integers are smaller, then the pair is smaller, and if the two pairs contain equal elements, they are equal. If none of the above holds e.g. if the first element of the first pair is smaller than the corresponding one of the second pair and the second element of the first pair is greater than its corresponding element of the second pair, then we cannot say that either of the pairs is greater or smaller, i.e. the order is “unknown” (e.g. pairs (44,26) and (25,42)).

Lines connecting elements indicate the order of the elements: the greater element is above the smaller element. Hasse-diagrams do not display the order if it is implied by transitivity. E.g. there is no separate line for the elements (89,73) and (25,42). If elements cannot be reached on lines without reversing direction, then they cannot be compared. E.g. the pair (93,21) is incomparable to all others whereas (44,26) cannot be compared to this latter pair and to (25,42) only.

This library internally represents relations between known elements similar to Hasse-diagram. This allows you to easily reason about or quickly manipulate such structures.

Sounds too mathematical so far? There are many uses for such a library!

Concept lattices obey rules similar to partial orders and can also be handled using this library. E.g., you might have a big e-commerce site with lots of products. For marketing purposes it would be extremely useful to know product baskets that people frequently buy. This is equivalent to asking where in a Hasse-diagram such baskets might be placed.

Or imagine you develop a medical system that automatically associates different mixes of medication with illnesses they effectively treat to support doctors in deciding on a therapy. This can all be addressed with concept lattices.

Refactoring software to reduce complexity is an important task for large software projects. If you have many different components that implement many different features, you might want to know whether there are groups of components that make use of specific features in other components. You could then find out whether the current form of abstraction exactly meets these dependencies, possibly learning that you should factor out a set of features in a separate module to reduce overall complexity.

Partial order structures represented by Hasse-diagrams can be used to optimize database queries on multi-valued attributes by providing better ways of indexing.

For general problem-solving we often need at least to know whether some solution is better, equal to, worse or incomparable to another. Given a large number of known solutions, the partial order structure containing the elements can be used to draw conclusions about e.g. whether their particular form (syntax) implies anything about their position in the partial order (semantic aspect).

What advantages does this particular library offer?

Some algorithms only perform batch generation of Hasse-diagrams: once the diagram has been computed, one cannot use such algorithms to add further elements to it incrementally. This library can handle incremental updates (adding and removing of elements) fairly efficiently as required for online-problems.

Both time and memory consumption seem suitable for practical problems, even not so small ones. Building up the Hasse-diagram for 1000 elements of a moderately complex partial order should usually take less than a second with native code on modern machines.

Please refer to the API-documentation as programming reference, which is built during installation with make doc. It can also be found online.

Specification of the partial order relation

All you need to provide is the function that computes the partial order relation between two elements. Take a look at the signature PARTIAL_ORDER in file lib/pomap_intf.ml:

You only have to specify the type of elements of the partially ordered structure and a comparison function that returns Unknown if the elements are not comparable, Lower if the first element is lower than the second, Equal when they are equal and Greater if the first element is greater than the second one. You can find example implementations of such modules in directory examples/hasse/po_examples.ml.

Given the specification, e.g. MyPO, of a partial order relation, we can now create a map of partially ordered elements like this:

The interface specification POMAP in file lib/pomap_intf.ml documents in detail all the functions that can be applied to partially ordered maps and objects they maintain. The important aspect is that information is stored in nodes: you can access the key on which the partial order relation is defined, the associated data element, the set of indices of successors and the set of indices of predecessors. Fresh indices are generated automatically for new nodes.

Together with accessors to the indices of the bottommost and topmost nodes in the partially ordered map, this allows for easy navigation in the associated Hasse-diagram.

The Pomap-library also contains modules that allow you to easily render Hasse-diagrams given some partially ordered map and pretty-printing functions for elements. This requires installation of the Graphviz package, which supplies the needed dot-utility. The use of these modules is demonstrated in the distributed hasse-example, which comes with its own README.

Up-to-date information is available at: https://mmottl.github.io/pomap